Apologies for the lack of post last month. As well as drowning in lockdown homeschooling, I was also drowning in Sapiens. This book took AGES to finish and I didn’t see the point in doing a post with just 2 books. 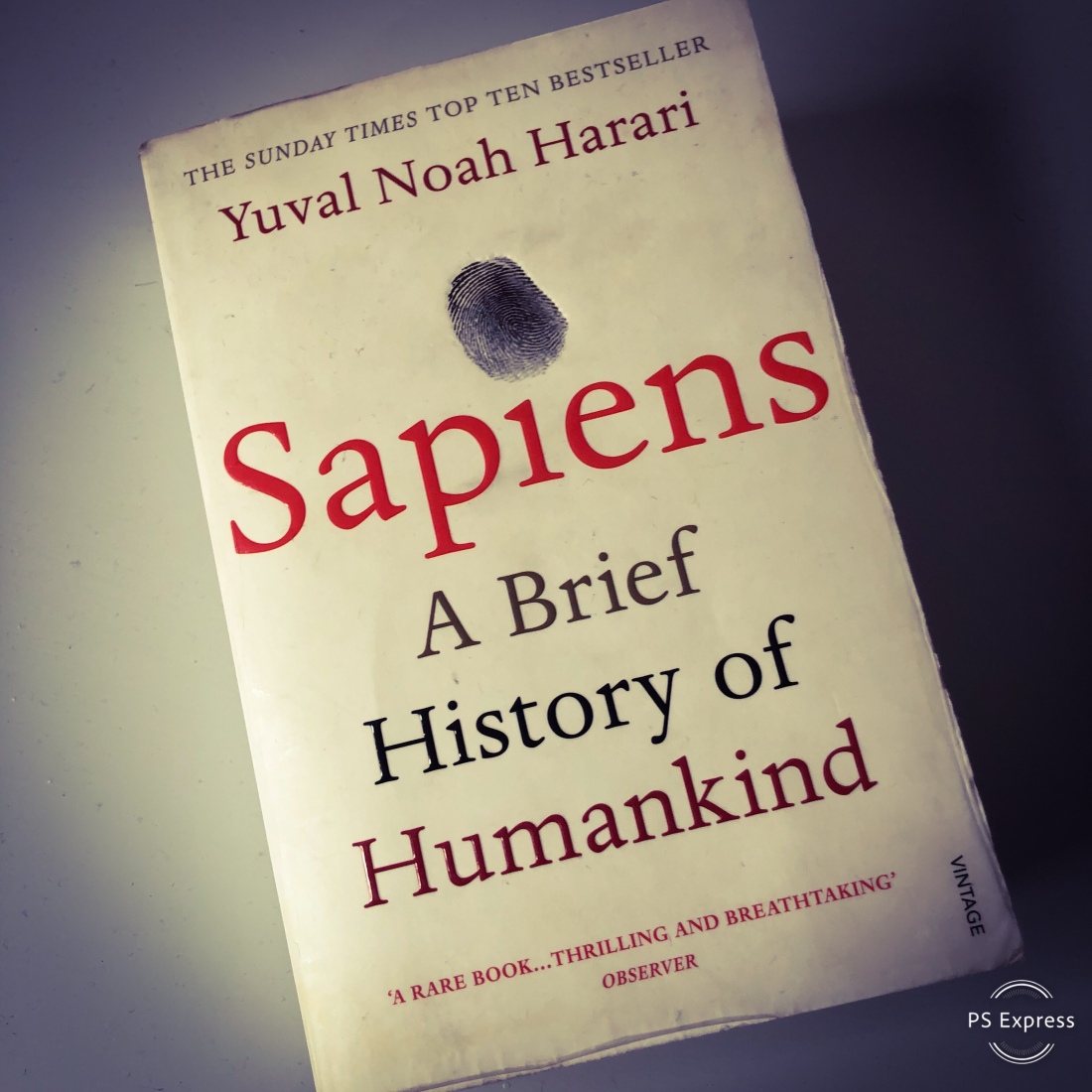 Fire gave us power. Farming made us hungry for more. Money gave us purpose. Science made us deadly. This is the thrilling account of our extraordinary history – from insignificant apes to rulers of the world.

Earth is 4.5 billion years old. In just a fraction of that time, one species among countless others has conquered it: us.

In this bold and provocative book, Yuval Noah Harari explores who we are, how we got here and where we’re going.

Each month on our book club FB group I post 6 books. A mixture of male and female authors, fiction, non fiction, modern and classics. People are invited to vote and the most popular book is read the following month. Sapiens was our choice for March and it won the poll by quite a long way. When it came down to the meeting there were 4 of us there. Only 1 out of 4 had finished the book and that person had read it previously so this time just dipped in an out. This got me thinking…..(Cue Carrie Bradshaw)….is what we think we want to read really what we want to read??? I worry that in this crazy world, where we are running at 100mph, always listening to that little voice in our ear telling us to achieve more, run faster, drink less, we want our reading to reflect that and we think we want to be challenged. People are too embarrassed to sit on the tube reading Jilly Cooper. I think our book group wanted the challenge of reading Sapiens but when it came down to it, hardly anyone managed it. I found it really heavy going. Sapiens is a book which you need to absorb. You need time to think about the mind blowing points that are being made. Trying to absorb Sapiens whilst lying in the bath, at the end of a long day, being constantly interrupted by a 4 year old with an over-active bladder made it quite a frustrating experience. That is my excuse. Other excuses were similar….”I do most of my reading on the tube and this isn’t the kind of book you can read when you have to keep changing trains on the way into work,” “to be honest, at the end of a long day in the office, I just want to read the literary equivalent of Love Is Blind, not something that requires actual brain cells.”

This is a book that doesn’t suffer from a dip in and out way of reading….in fact I think it benefits from it!! Because of this, I’m not sure it is a great choice for a book club. Reading this book to a deadline did not work for us and I think resulted in a disservice to the book. So if you are tempted to pick this up, and you definitely should, give yourself some time. Don’t rush! 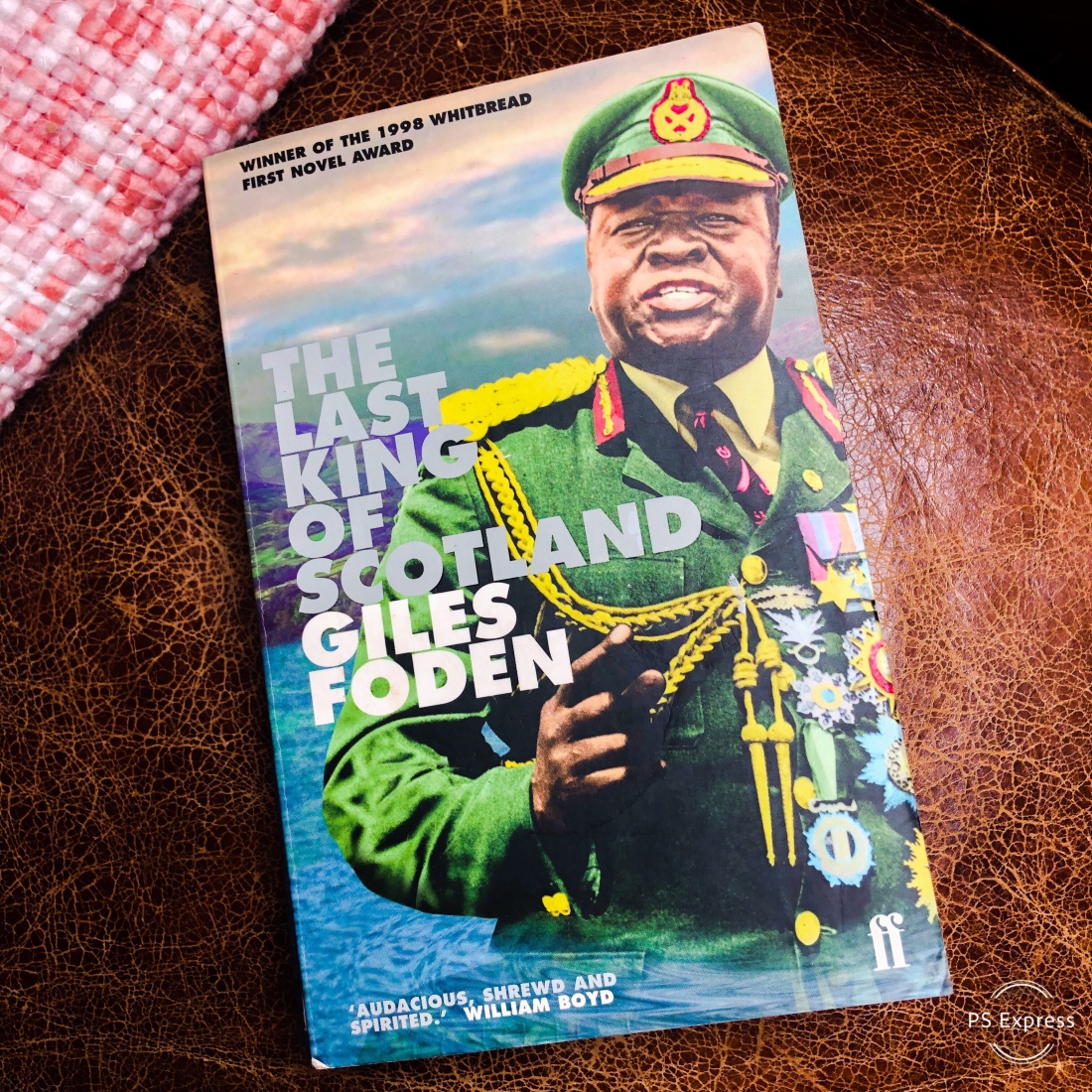 What would it be like to become a Idi Amin’s personal physician? Giles Foden’s best selling thriller is the story of a young Scottish doctor drawn into the heart of the Ugandan dictator’s surreal and brutal regime. Privy to Amin’s thoughts and ambitions, he is both fascinated and appalled. As Uganda plunges into civil chaos he realises action is imperative – but which way should he jump? 

Generally I find that films don’t live up to the novel. It was the other way round with this book. I have seen the film twice and I urge you to watch it if you are stuck at home and in need of stimulation. Forest Whitaker is INSANELY good and quite rightly won numerous awards. The film is based on the book and has made some significant plot changes. This is historical fiction. The character of Nicholas Garrigan does not exist but he could be based on Bob Astles and Scottish doctor Wilson Carswell. I would say that the book is definitely more historically accurate than the film.

I’m not going to say much about the book because the copy I have is clearly a bit of a dud. I read to page 218 and incredibly annoyingly at this point 33 pages were omitted and replaced with pages 91-122. I am ashamed to say that it took my sleep deprived mind about 10 pages to realise I had read them all before!!! 🤔🤔 Really annoyingly, I think the pages missing were pretty crucial and involved Garrigan’s arrest by Amin. The book resumed at page 251 but by then I felt pretty confused and a little like that thing when something is being explained to you which you don’t understand but you nod, smile and pretend that you do…..to be honest this is my default mode. Anyway, hey ho, definitely watch the film!!!

Johnny Casey, his two brothers Ed and Liam, ththeir beautiful, talented wives and all the kids spend a lot of time together-birthday parties, anniversary celebrations, weekends away. And they’re happy family. Johnny’s wife, Jesse– who has the most money then insists on it. 

Under the surface, though, conditions are murkier. While some people clash, other people like each other far too much… 

Everything stays under control until Ed’s wife, Cara, gets concussion and can’t keep her thoughts to herself. One careless remark at Jonny’s birthday party, with the entire family present, starts Cara spilling out their secrets. 

In the subsequent unravelling, every one of the adults find themselves wondering if it’s time – finally – to grow up? 

Book snobbery, book ignorance. Call it what you will but I am guilty of it. My mum sent me this book just after lockdown was announced. I would never have chosen it myself. After reading Lucy Sullivan is Getting Married (also bought by mum*), Marian Keyes had been chucked in Ella’s Small-Minded-Book-Snob-Skip. Keyes languishes in the skip of doom with the likes of Sophie Kinsella, Jane Green and Helen Fielding. Basically anything that I would put in the Chick Lit category. Anything that involves a female protagonist who moans about their weight and finding a man. Any book whose book jacket says something like:

Arabella thought she had it all….a great job, fabulous clothes, a beautiful house. Her only problem??? Men! Why did she always fall for the bad boy?Then she meets Tom and discovers that sometimes it’s hard to make the right choices.

Any book that has a bright pink cover, a loopy-fonted title and a picture of a wedding cake, a nonchalantly discarded stiletto or a discarded tie. All of these books get chucked in the skip.

After trudging through Sapiens, I decided I deserved something a little easier on the old brain cells. Yes, this book is undoubtedly easier, no major evolutionary chats here!!! I bloody love a book about dysfunctional families/relationships/marriages and that is what this book is all about. It’s also well written with believable and likeable characters. It’s was over 700 pages but I whipped through it.

*Interestingly, although mum has now bought me 2 Keyes novels, I have never seen her reading a Marian Keyes herself.

For years, rumours of the ‘Marsh Girl’ have haunted Barkley Cove, a quiet town on the North Carolina coast. So in late 1969, when handsome Chase Andrews is found dead, the locals immediately suspect Kya Clark, the so-called Marsh Girl. But Kya is not what they say. Sensitive and intelligent, she has survived for years alone in the marsh that she calls home, finding friends in the gulls and lessons in the sand. Then the time comes when she learns to be loved. Went two young men from town become intrigued by her wild beauty, Kya opens up herself to a new life – until the unthinkable happens. 

What kind of books do you want to read in Lockdown? I have been pondering this and I do have a few important criteria:

1. I don’t want anything that involves being on a beach, travelling somewhere fun or looking for adventure.

2. I don’t want anything really challenging. After a day of looking after 3 kids, homeschooling 2 of the little blighters and being ‘mummed’ CONSTANTLY I need something that I can just read. I do not need to feel intellectually challenged. Key Stage 1 fractions are challenging enough.

3. I don’t want anything that takes me ages to get into. I want short chapters and something that hooks me immediately. It also needs to be a book that I can pick up and put down easily.

Crawdads fitted the bill quite nicely thank you. I know people LOVE it. It was a solid 3.5 ⭐️ from me which I rounded up to 4⭐️. I enjoyed it. I wouldn’t say it was life changing but I stayed up til 2am reading it and believe me, at the moment not much keeps me awake past 9pm!!!

Anyway I hope you are all safe. Thank you so much for reading.