Hello all. Apologies that this post is a couple of days late. I have decided to give myself a bit of a break and stop telling myself off if I don’t manage to post at exactly the right time every month. The end of the month gives me the feeling of stress I used to have on a Sunday night when I was at school and I had to hand in my homework the ne xt day. So instead of rushing to get my thoughts in order, in between looking after the kids, I am just going to take my time and stress less. I hope that is ok!!

They meet by chance in a local bar in a small town in Delaware. Polly is heading west. Adam says he’s also passing through. Yet she stays and so does he – drawn to this mysterious redhead who unnerves and excites him. Over the course of one hot summer, they abandon themselves to a steamy affair. But each holds back something from the other – dangerous, even lethal, secrets ….

Who writes the blurb on the back of book jackets? Is it someone in marketing??? I really enjoyed Sunburn by Laura Lippman bit if it hadn’t come recommended (from the brilliant podcast What should I read next) I would NEVER have picked it up. The blurb on the back of the book jacket makes it sound like a trashy Mills and Boon- steamy affair, dangerous secrets 🤮. I think the book description does the book a bit of a disservice….I would not call it steamy but this lack of steam relieved me somewhat – who wants to read about shaking headboards when your sex life is currently deader than a dead thing. Anyway it was a pretty good read. A solid 3/4 star. Perfect for a holiday when you don’t want anything too taxing. The moral of this post is to buy your books based on recommendation and not on the blurb on the back . 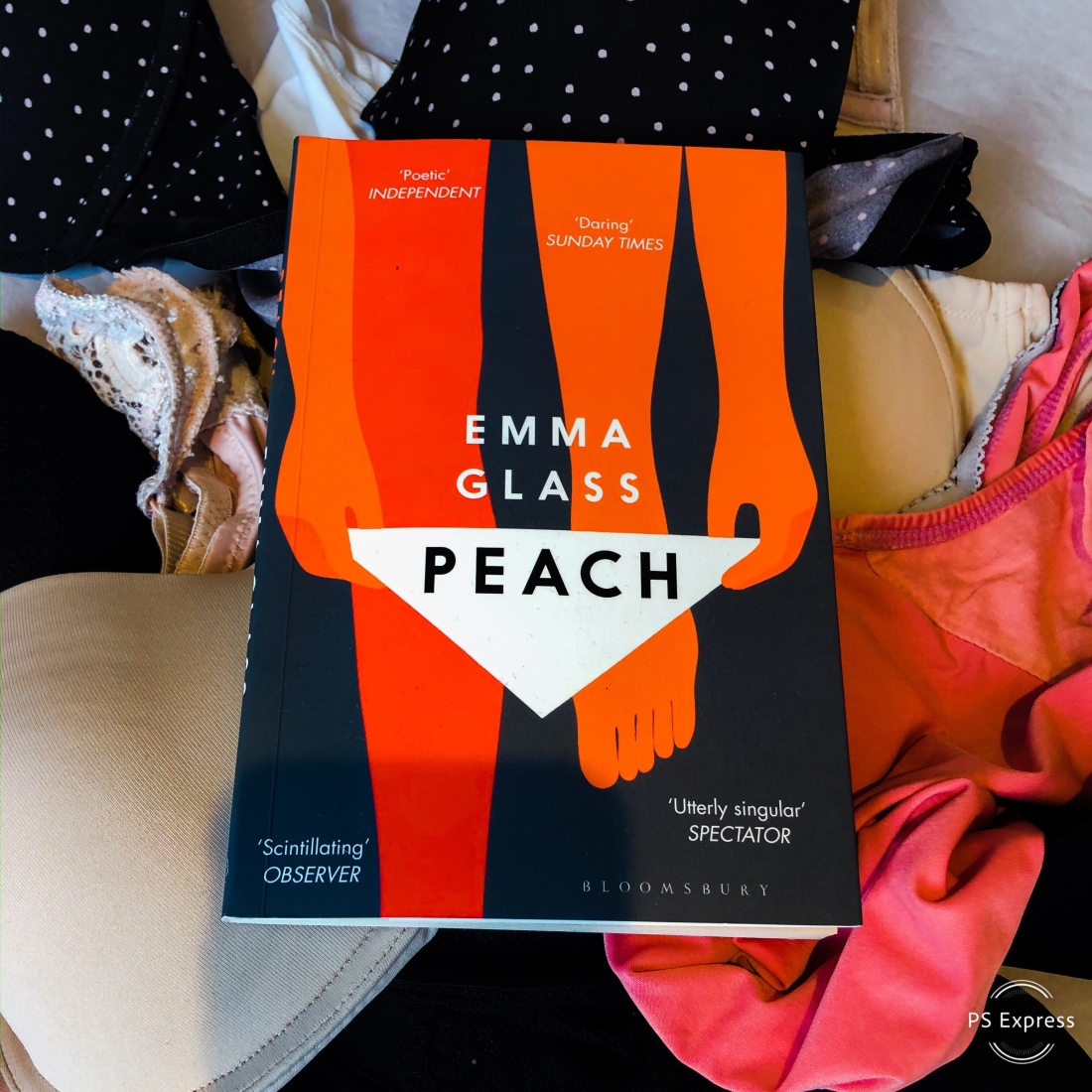 Peach is a teenage girl like any other. She has college, and her friends, and her parents and the new baby, and a lovely boyfriend Green. She has her friend Sandy, and Sid the cat, and homework to do.

But something has happened-something unspeakable – and the world has become unfamiliar, fractured into strange textures and patterns. Reading through her refracted universe, Peach knows that the people she loves are in danger, real danger. If she is not to be swallowed hole Peach must summon all her courage and find something nameless and strange that lies within her.  

What are your thoughts on books that are a bit different? I originally used the word ‘odd’ instead of ‘different’ but it goes without saying ‘different’ is different for everyone. For me this book was different. My husband bought it for me and he always seems to buy me books that I wouldn’t necessarily pick up myself. I am a typical cancerian and by this I mean that I am comfortable in my comfort zone. With books it means that I know what I like and that is what I gravitate towards. Anyway, Coming Through Slaughter (which I reviewed a few months ago) and Peach were both my husband’s picks, they were both out of my comfort zone, both very poetic, both almost like a stream of consciousness. Both reminded me of those dreams you have when you have had a bit too much to drink and everything seems a bit weird. 🍷🍷🍷🍷🍷🍷🍷🍷🍷🍷🍷🍷🍷🍷🍷🍷🍷🍷🍷🍷🍷🍷🍷🍷🍷🍷🍷Both books were short so I just buckled in and allowed myself to be taken for a ride. It’s definitely good to challenge myself when it comes to reading. This is the main reason why I enjoy book club….I am currently trudging through Sapiens which is a book club read and definitely not something I would have picked up otherwise.

Anyway, onto Peach. This book comes with massive triggers for sexual assault, animal cruelty, cannibalism. When you think that the book is only 112 pages long you are in for a pretty intense ride. I found it visceral, brutal and disturbing. There were times where I literally winced when reading. Like Peach, Emma Glass is a vegetarian. To research the book, she forced herself to cook a sausage: the gristle, fat and slime disgusted her and consequently Peach’s rapist becomes a sausage. Is he a literal sausage or in Peach’s disturbed mind does he just have sausage attributes? The same with Mr Custard and Green. Indeed, all the characters are ‘things.’ Initially, I was frustrated by this but as the book went on, I discovered that it didn’t really matter. Enjoyable??? No, this book is not enjoyable. Disturbing?? Yes and definitely a book that will stay with me. 🍑 🍑🍑🍑🍑🍑🍑🍑🍑🍑🍑🍑🍑🍑🍑🍑🍑🍑🍑🍑🍑🍑🍑🍑

Dark, mysterious and mordantly funny, Oliver Twist features some of the most memorably drawn villains in all of fiction – the treacherous gang master Fagin, the menacing thug Bill Sikes, the Artful Dodger at their den of thieves in the grimy London backstreets. Dickens’s novel is both an angry indictment of poverty, and an adventure filled with an air of threat and pervasive evil. 

I am embarrassed to say that it has taken me so long to read this book because having seen Carol Reed‘s film Oliver, I thought I knew the story. 😯😯🙄🙄. DON’T ASSUME YOU KNOW A BOOK BECAUSE YOU HAVE SEEN THE MOVIE. As a ridiculously keen reader, and this being a book blog, I am MORTIFIED to admit that I am GUILTY. Mr Dickens, I humbly apologise. If you are a fool like me and think you know the story because you have seen the film, I urge you to REVIEW THE SITUATION. 😂🤣

On reading the novel, I am surprised that it lends itself so well to a musical. The book is really dark and Dickens uses it to highlight his opinions on child labour, poverty and the Poor Laws. Unlike the musical,although Oliver is the title character, he is not the most featured character. On finishing the book, I don’t really have much of a sense of who Oliver is….apart from a young, naive orphan who wants to be good.

I don’t think you can mention the novel without talking about anti-semitism. According to the font of all knowledge….Wikipedia, Fagin is referred to as ‘The Jew’ 274 times in the first 38 chapters. When criticised by the Jewish Chronicle, Dickens responded:  “it unfortunately was true, of the time to which the story refers, that that class of criminal almost invariably was a Jew.” After numerous criticisms, Dickens changed the rest of the text and for the remaining chapters Fagin is barely called ‘the Jew.’ Being a big fan of the musical, I was interested to read that Ron Moody also struggled with the anti semitism. Of Fagin he said:

….. as a Jew, I could never play such an evil, corrupting character. So I made him into a clown and turned the songs, which Lionel Bart had intended to be sung straight, into comedy. To me, numbers such as I’m Reviewing the Situation leapt off the page as comic turns, but Bart accused me of ruining the show.

Without a doubt the difference in character between Dickens’s Fagin and Moody’s was a shock. In the novel there is nothing of the ‘clown’ about him. He is the brains behind the criminality in the book and Sikes is essentially just a big thug.

I love Dickens’s writing. Granted, there are a few long-winded passages (the quote below is one of the longest sentences I have ever read), but I loved the flow and pace of the novel. 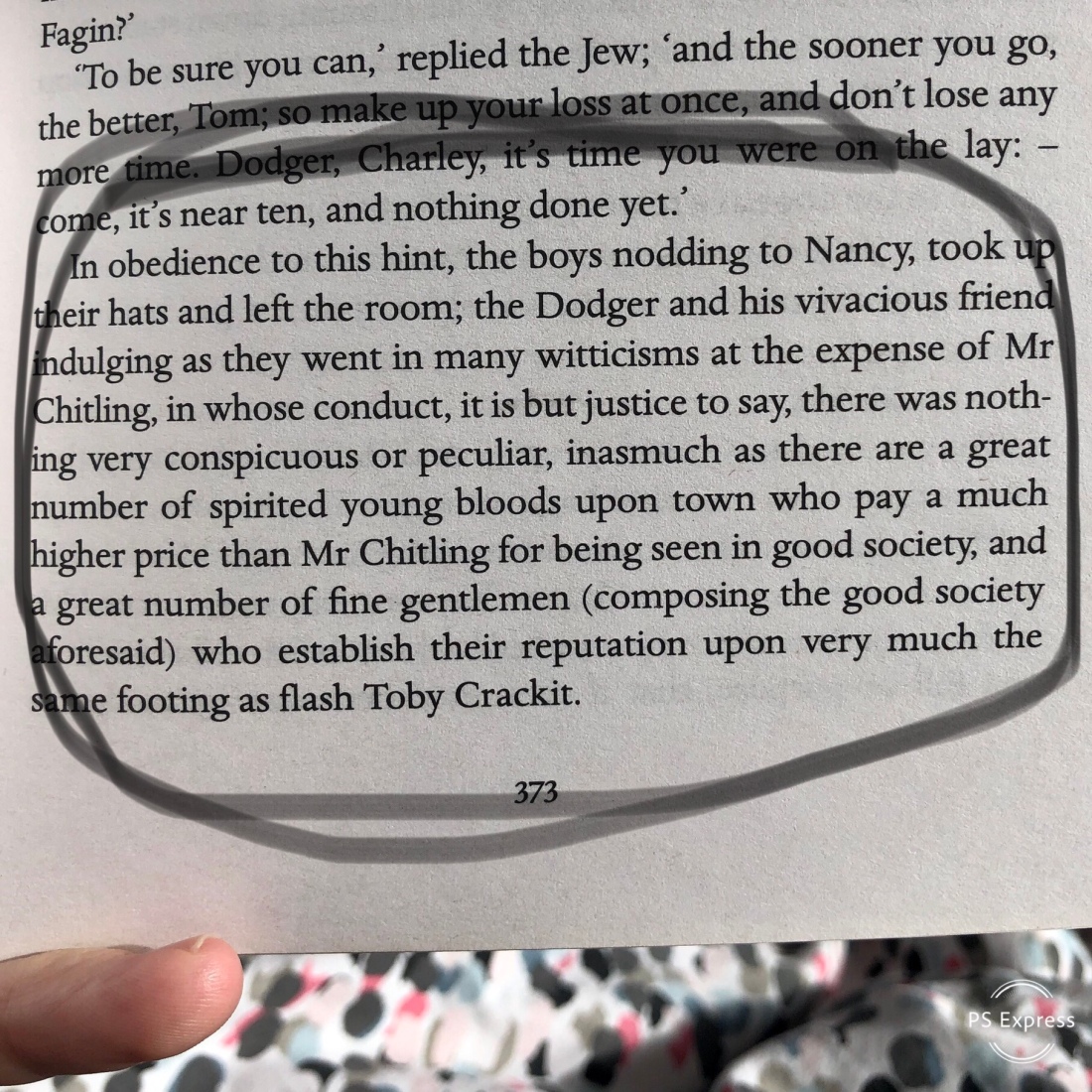 Dickens is an author who has the ability to terrify, amuse and to pull on the heart strings . The chapter when Fagin is awaiting his execution is really affecting. Few books have made me cry but I found this passage from Nancy really upsetting. Here, I think Dickens completely summed up why people often stay in abusive relationships. So very sad.

‘When ladies as a young, and good, and beautiful as you are,’ replied the girl steadily, ‘give away your hearts, love will carry you all lengths – even such as you who have home, friends, other admirers, everything to fill them. When such as me, who have no certain roof but the Coffin lid, and no friend in sickness or death but the hospital nurse, set of rotten hearts on any man, and let him fill the place that parents, homr, and friends filled once, or that has been a blank through all our wretched lives, who can hope to cure us? Pity us, lady,-pity us for having only one feeling of the woman left, and for having that turned by a heavy judgement from a comfort and pride into a new means of violence and suffering.  

Until next month. Thank you so much for reading .